The University of Central Florida has been awarded a nearly $2.9 million grant from the U.S. National Science Foundation to provide cybersecurity scholarships to undergraduate and graduate students.

Scholarship recipients will focus on cybersecurity training and research at UCF, and after graduation, must work for a federal, state, local, or tribal government organization in a p... more...

A new MS degree in Cybersecurity will be available starting this Fall.

Additional details can be found on the degree page here

The students competed at CyberSEED, a cybersecurity conference hosted by the University of Connecticut. It included three separate team competitions; UCF took first place in two of them and second place in the other.

“I’m proud to say we beat Ivy League schools,” said Thomas Nedorost, faculty advisor for the Collegiate Cyber Defense Club, also known as Hack@UCF. “I think this gives UCF a really good reputation among schools and companies in the Northeast.”

Members of Hack@UCF are currently back-to-back national champions in cyberdefense, winning the National Collegiate Cyber Defense Competition in 2014 and 2015. The victories at CyberSEED add to that resume.

Student Alex Lynch led a team that also included Alex Davis, Mark Ignacio and Ditmar Wendt in a network security “capture the flag” competition. While Hack@UCF is known for cyberdefense and the ability to fend off hacking attacks, Lynch and his team had to hack their way into a virtual-bank network.

Over the two-day CyberSEED competition, they took progressively more control over the network, gaining greater access and even hacking an ATM. They took first place, splitting $8,000 in prize money among the four team members.

“We were in front for the majority of the competition, right off the bat,” said Lynch, a senior majoring in computer science. “It felt really good. It was the first competition we’ve won that was an offensive competition.”

Teams were given a packet of information with spotty information about an employee of a fictitious company. Using that information – including a birthday card that told them her date of birth and a pay stub that included a partial name – they used social media posts to learn enough personal information to crack security questions and access an email account. That helped compromise the accounts of other employees of the company.

“It’s hacking the human element,” Lawrence said. “Getting people to trust you, to like you, to do something that isn’t a good idea from a security standpoint. Be careful what you post on social media – it’s like this free buffet of information about your life.”

The third competition was a research challenge that focused on the “Internet of Things.” Students Orlando Arias, Khoa Hoang and Jacob Wurm authored a paper that explored the vulnerability of smart electrical meters and proposed a solution. The students, who are advised by Yier Jin and Samuel Richie, faculty members in the Department of Electrical and Computer Engineering, won second place and $7,500. 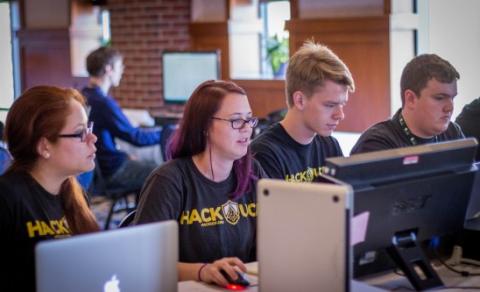