The University of Central Florida has been awarded a nearly $2.9 million grant from the U.S. National Science Foundation to provide cybersecurity scholarships to undergraduate and graduate students.

Scholarship recipients will focus on cybersecurity training and research at UCF, and after graduation, must work for a federal, state, local, or tribal government organization in a p... more...

A new MS degree in Cybersecurity will be available starting this Fall.

Additional details can be found on the degree page here

Unlike other stand-alone competitions, the Collegiate Cybersecurity Championship Cup recognizes the best team in the nation for overall performance at multiple cybersecurity competitions.

The competition is managed by the Center for Infrastructure Assurance and Security at the University of Texas at San Antonio with the support of a grant from the Cyber Security Division of the Department of Homeland Security Science and Technology Directorate.

Organizers say the cup is designed to promote student participation and reward performance in multiple cybersecurity competitions, encouraging students to obtain as much experience as possible prior to graduation. A secondary purpose is to foster cooperation between the various competition organizers and sponsors.

During the competition year, UCF students participated in 21 individual cybersecurity competitions and ranked highly in all those events, which is why they were named the winners.  UCF’s best competitions during the 2013-2014 season included finishing 1st out of 180 teams in the 2014 National Collegiate Cyber Defense Competition, placing 6th out of 1383 teams in the 2013 CSAW CTF Competition, and placing 6th out of 193 teams in the 2013 Sharif University CTF Qualifications.  As of January 5, 2015, CTFtime.org ranks UCF’s “Knightsec” CTF team 72nd out of 6207 international teams and 12th out of 260 US teams.

“UCF’s Cyber Defense team is a shining example of the ‘striving for excellence’ principle that guides the College of Engineering and Computer Science mission,” said Michael Georgiopoulos, dean of the college. “UCF’s Cyber Defense team impact to our many students in the College of Engineering and Computer Science cannot be underestimated either, especially during a time that protection against cyberattacks has become a matter of national priority.”

The Collegiate Cyber Defense Club at UCF was founded in 2012 with the goal of fostering an information security-aware generation in Central Florida. The club hosts weekly meetings to educate the public. Student club members have the opportunity to participate in these competitions.

Nedorost accepted the trophy cup at the Hawaii International Conference on System Sciences (HICSS), one of the longest continuously running scientific conferences. Now in its 48th year, HICSS brings together highly qualified interdisciplinary professionals addressing issues in the areas of computer science, computer engineering, and information systems in an interactive environment. 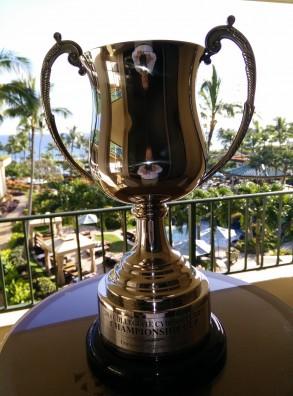